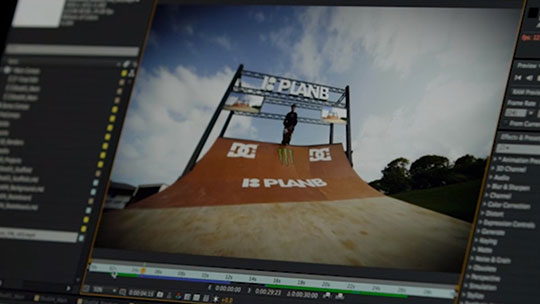 Adobe and some other have been providing some insights into the latest versions of After Effects and other applications, and even from a quick look, one is able to tell that it is a not only a huge, but a solid release. A release that is really difficult to criticize.

The Past is in the Past

I have been a harsh critic when it comes to Adobe After Effects, but it’s not unwarranted. I simply and strongly believe that if you are positioning yourself as “THE” motion graphics and compositing standard, then you need to have the most basic and simplest things available on purchase.

Historically simple efforts and additions have always seemed to fall through the cracks with each release, such as OMF import, EXR import, Rotoscope workflow enhancements, as some examples.

I have always felt that After Effects relies way to heavily on third party developers, which as a premise is a solid plan, but not for core things like import, tracking, motion vector support, and basic compositing components. Clean your own house, don’t expect someone else to do it.

I have no real issue with efforts for simplifying solutions with “just do it” features, and most recently we have seen this with the After Effects Camera Tracker, and the RotoBrush Tool in AE. The problem that I tend to have with those JIT tools is the implementation, they are essentially islands within After Effects.

So instead of creating integration, transformation, and synergy by leveraging or incorporating some of the already great features, they are under-conceived and underutilized.

Trying to be well though out and well planned is creating a RotoBrush tool with amazing and ease of use magic capabilities AND allowing the user control the results right down to its core. Creating a complete feeling is allowing the user to convert or use RotoBrush in conjunction with with AE’s Mask and Shapes system, and in essence the same issues holds true with the Camera Tracker.

Enter The Next Version of After Effects

Having said all that, Adobe and the After Effects team, lead by Steve Ford have placed their best foot forward with a strong next release of After Effects, showing that they are determined to take AE in a direction that is best, and not just convenient.

Simply by looking at the list of new features dealing with importing and managing footage in After Effects, this becomes really clear. Being able to directly import DNxHD MXF OP1a and Op-Atom files, and QuickTime (.mov) files with DNxHD media without installing additional codecs, a better performance DPX importer, and improving performance with OpenEXR importer and ProEXR, to me says that After Effects is looking after its wide-based pro users.

Also simple features like sampling for scaling in with layers, including bicubic and bilinear is a huge deal. After Effects will now let you choose between bicubic and bilinear sampling for selected layers, which actually works better than the similar option in Photoshop as the After Effects sampling algorithm works better at more extreme scales by preserving over and under range values with fewer errors.

Another big improvement is allowing users the ability to refine the results of the JDI Camera Tracker, by deleting track points that are problematic or not contributing well to the tracking solution. In addition there is a new ground plane and origin in the 3D Camera tracker, allowing you to define a ground pane and origin coordinate system.

Of course the newest feature with the largest impact is the one regarding the alliance with Maxon and Cinema 4D. Calling it a “tighter integration” would be not only an understatement, but wildly inaccurate. The two applications seem to work seamlessly together in some major ways which will seriously effect workflow in rendering, importation, and synchronization, blurring the lines of what it means to use 3D in After Effects for motion graphics work.

After Effects can open entire Cinema 4D files natively, changes will be seen in both applications, and After Effects now has the Cinema 4D renderer as a rendering engine, and in addition to all this, AE is bundled with a new “lite” version of Cinema 4D which I believe has a twofold purpose in better integrating user workflows, and also adding a much better tool and solution for users working with 3D in After Effects. For a look at the latest features of After Effects, check out the NAB Sneak Peeks here, and also the page at Maxon for a look into the Cinema 4D integration here.

the After Effects Team looks to have an impressive release on their hands and I am sure everyone is looking forward to taking it out for a spin, the shortlist of After Effects New Features includes: