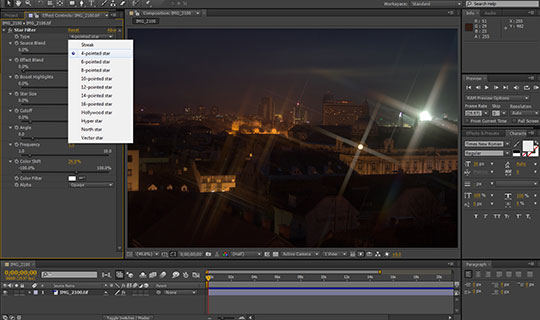 There are times when the term or phrase “filter” has some negative connotations, especially when discussing After Effects or Photoshop. However, in the case of Star Filter plugin for After Effects, it is completely unwarranted.

Named after the photographic effect of placing filters on your camera lens, specifically the Cross Screen Filter, Star Filter recreates this effect right in After Effects and allows you add realistic star streaks to virtually anything in After Effects with some pretty great control over the final result.

Star Filter from Scarab Labs is an effects plugin for After Effects that simulates a cross screen effect by adding star streaks to lights and highlights on your composition in After EFfects, and recently Star Filter has updated to version 2 which has matured to hold some significant new features.

One of the most notable new features is that you are now able to apply the Star filter Plugin to a Text Layer in After Effects where on earlier versions or the plugin, this was not possible.

Some other new additions to Star Filter include the ability to change the color of the streaks with a color picker, the ability to set the alpha to opaque for better use with some blending modes, and you are also able to have the streaks in Star Filter go beyond the extents of a layer which is a great feature for compositing.

Some of the links on lesterbanks are "affiliate links", a link with a special tracking code. This means if you click on an affiliate link and purchase the item, we will receive an affiliate commission. The price of the item is the same whether it is an affiliate link or not. Regardless, we only recommend products or services we believe will add value to our readers. By using the affiliate links, you are helping support our Website, and we genuinely appreciate your support.
Blue Pencil Sketchpad for Maya Adds AutoKey Feature in... Previous
Using the Particle Morphing Tools Addon for Blender Next