Maya and mental ray have long had a tug a war going with usability, features and usability.

Mental ray, although a completely capable renderer is notoriously difficult to use and manage within Maya – Especially if you have seen Metal Ray’s implementation within 3DS Max.

Most things were available in parallel in mental ray Maya, however quote often things would be “hidden” and needed to be uncovered by issuing command lines.

Thing have improved however, by a long shot. With the newer releases of Maya, mental ray has not only streamlined some usability, but also added some great new features.

An example would be the new unified sampling methods in the latest iterations of Mental Ray for Maya, and the new layered shaders library.

Another example would be using and HDR image for lighting a scene. In previous versions of Maya, working with an IBL would be relatively straight forward, that is until you tried firing off a final render.

Often times you would find that the scene would render out “splotchy”. There were only really two solutions for this, crack up the final gather settings, or as an alternative, you could have the final gather rays lookup a different “blurred” image of the HDR that you were using to light the scene.

In fact, you could cleverly have Maya use the high resolution HDR image file for all other aspects of the render including refraction, reflection, etc. and only have the lighting solution for the scene look to a smaller resolution, more blurry image. 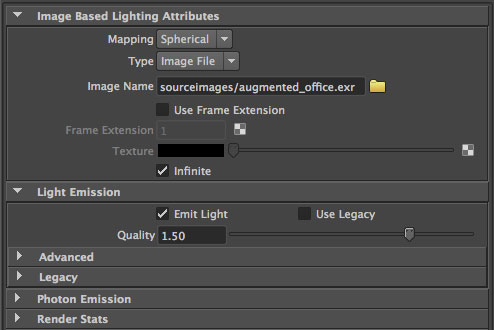 This can be done by using a mental ray production ray switch. The concept is easy, however, it did take an unnecessary while to set up. This is no longer the case in Maya 2015, where there is a new IBL setting specifically for lighting.

If you are familiar with Maya, you may remember the “lighting” section of the IBL node that you never really used because it was… well, it made your scene unfeasible to render as it took much much too long.

All of that has been cleaned up in Maya 2015 with a new and tidy “Light Emission” section that has just two check boxes and a quality slider. By checking “Emit Light”, Mental Ray will render a much cleaner result with using only one HDR image as the IBL.

In fact, it is a much better result that the old workaround using the MIP Ray Switch, and a blurry HDR.

Getting a cleaner and better render when using an IBL, can now be governed by one simple quality slider. 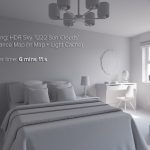 Using HDR Lighting for Interiors, and Comparing V-Ray... Previous
Tips for Improving your 3D renders in Photoshop Next 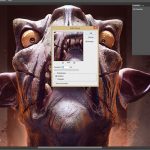 Run Into the Maya 2015 IBL Caching Problem? Here is a Work Around