Dan Goodwin is a Pipeline TD at Double Negative how shows how you can build amazingly intricate patterns With Side FX Houdini, L-Systems and VEX.

An L-System, or Lindenmayer system is a recursive system that basically contain a bunch of production rules that expand each bunch into a larger string. It’s the pattern of how plants, trees and other things grow in real life.

Side FX Houdini has an L-System Geometry node that can create fractal geometry based on the recursive application of simple rules. That doesn’t mean that you can’t effectively “roll your own”. Goodwin walks through his setup in the network and runs through the VEX code needed to make it all work.

When the pattern generates the pattern is very much like plant-life, but after running for a bit, it looks much more fractal in nature. “You get some really interesting shapes when fractals take over! Imagine if the lines were actually glowing, it would make a cool looking alien console I think” Goodwin says about his system.

Dan Goodwin provides the VEX code for the project here. 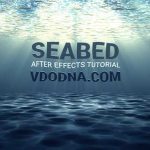 Build an Underwater Scene With Fractal Noise in After... Previous
Easily Lock a Control to World-Space With This Maya Script Next 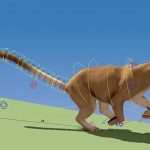 How to Build a Houdini Pop Solver from Scratch