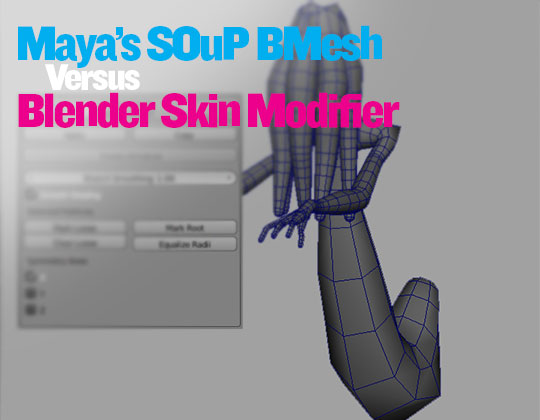 Jimmy Gunawan takes a look at both Maya and Blender’s ability to create quick meshes based on joints, in the case of Maya, through SOuP’s new Bmesh, and in Blender using the Skin Modifier in version 2.54 created by Nicholas Bishop. In both cases, Jimmy creates a comparison of the two tools by attempting to create the same character in both applications. Check out the shootout comparison of Maya SOuP Bmesh tool versus Blender’s Skin Modifier tool here.

As you knew already Maya recently got BMesh via SOuP plugins allowing us to do quick meshing based on Joint similar to ZSphere inside ZBrush.. While on the other side, Blender Open Source 3D is soon to be upgraded to version 2.54 and officially gets the awesome Skin Modifier from Nicholas Bishop

Recently in SOuP development emerged the addition of a ZBrush ZSphere like tool directly in Maya called bMesh. The recent updates section notes “Remember the zSpheres tool in ZBrush ? Well, that’s the same thing but directly in Maya and even more interactive.”

One of the slight differences is that Blender’s Skin Modifier is actually edge based, working with edges, vertices and meshes. This has the advantage of using edges to rough out the structure quickly, then convert the edges to joint if needed. Blender has the ability to have points in 3D that you are able to connect, much like creating polygons with points in Lightwave (something that I sadly miss in Maya working with Vertices). By working with edges, the Blender Skin Modifier will allow for Looping which is not possible in Maya.

SOuP is a free collection of Nodes for Maya that make it more procedural. Developed and supported by one guy, Peter Shipkov who I imagine to be scary-smart. There have since been some other contributors to the SOuP project including Jeremy Raven, Maxim Kotrolev, David Schoneveld, Sergey Tsyptsyn, David Corral, Jack Straw and Michel Tuttle.

Using Dynamics in Cinema 4D to Create a Working Weight... Previous
Preview of the Advanced Mapping Toolset for Cinema 4D Next