On the verge of becoming a woman Sora is woken by a nightmare and decides to follow a group of men into the city in the hope of finding her mom. 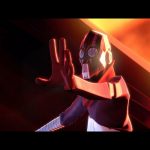 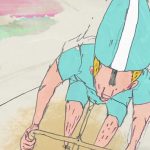