Animation Nodes 2 for Blender is Here

I would say that Cinema 4D were on to something back in the day when they released the MoGraph module on to the world. Since then, lots of DCC’s have been incorporating mograph-style tools into their toolset. Plenty of developers were keen to provide procedural animation and instancing tools for Maya, After Effects and 3ds max. Blender has a really amazing procedural animation toolset in Animation nodes, and just recently Animation Nodes 2 has been released.

Animation Nodes 2 has had a re-write in many parts of it, shifting over to the Cython (a mix of C and Python) programming language. This was done to increase performance in Blender. Generating vectors now is up to 400 times faster. Math operations can see speed increases of up to 200 times. Pretty impressive!

Another new addition to Animation Nodes 2 are the Vectorized Nodes. A vectorized node is a node that can work on individual values as well as on lists. Together with Cython, this leads to big speedup for some operations.

Falloffs have been included too. Now you can have an in-scene widget that can influence objects in your scene. In Blender this would be similar to using weight painting to designate influence for modifiers, only Falloffs are an object that can be moved in a scene.

Learn more about Animation Nodes 2 and all the new features.

Animation Nodes 2 is the result of Jacques Lucke’s hard work in developing amazing admins for blender. You can help contribute to his work here. 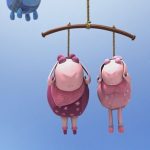 MOBILE, from Verena Fels Previous
Create an Easy Animated Triptych in After Effects Next 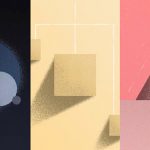 How to Create a Wrinkle Effect With Animation Nodes

How to Create a Procedural Knitting Effect With Animation Nodes