Watch a 33 minute tutorial from Entagma’s Manuel Casasola Merkle that shows how you can use Houdini’s Grain Solver to connect wires dynamically in Side FX Houdini. Merkle uses a Position Based Dynamics (PBD) simulation to dynamically add connections to wires, or as he mentions in the video “Yarns”.

The POP Grains solver in Houdini uses a position based approach to simulate a mass of particles. The PBD solver is perfect for simulating sand, wet or dry, snow or other destruction simulations. It is also good for simulating soft body simulations that include cloth and strands. Check out Rohan Dalvi’s dive into using the POP Grains Solver in Houdini, if you are not familiar with it or need a refresher.

Merkle’s tutorial covers creating the wires or yarns, preparing the geometry for the PBD simulation, and then simulating the system. He then adds custom connections and shows how you can shrink those connections. Instead of using a SOP solver Manuel uses geometry wrangles in DOPs to generate geometry on the fly.

Make sure you visit Entagma for a download of the scene file. 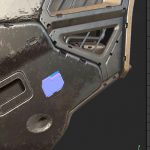 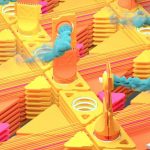 How to Create Groups With Vex in Houdini