First Look at AtomKraft 3D Environment for After Effects

I have been checking out the beta releases of the AtomKraft rendering engine for After Effects and I thought I would do a little post showing off the capabilities so far. 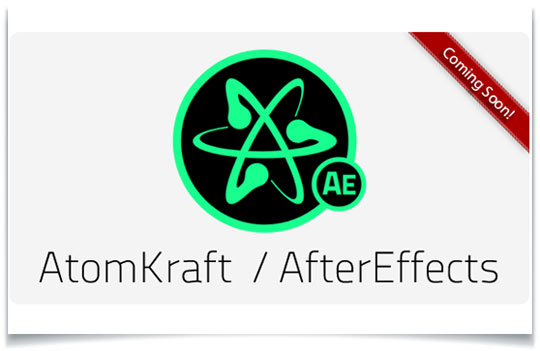 AtomKraft is a full-blown rendering environment originally created as a suite for The Foundry’s Nuke, and now right in After Effects using the 3DeLight Renderman Compliant renderer, AtomKraft offers a ton of features previously not available in After Effects anywhere.

What is Atomkraft AE?

AtomKraft is being dubbed as a complete replacement for built in after effects renderers, supporting obj and alembic formats, AK/AE can not only import 3D formats, but it also provides complete support for the native After Effects 3D system Attributes and features such as after effects lights, cameras, bending, 3D layers, extrusions, materials, and environment layers.

How does this differ from simply using After Effects 3D objects in a workflow?

Datasets constructed in After Effects is limited to After Effects, so in essence once you have built a 3D scene or object in after effects, you are pretty much stuck there – and that can be pretty limiting from a professional pipeline or project workflow point of view. AtomKraft really opens up a whole range of opportunity in after effects where you are able to share and use resources with 3D applications and render using a renderman compliant renderer using modern rendering techniques and attributes. This includes advanced raytracing effects such as global illumination, glossy reflections and refractions, ambient occlusion, HDR Lighting and shadowing, environment occlusion, subdivision surfaces, sub-pixel displacements and soft area shadows to name a few. Read the rest of this article

This will allow you to explore better workflows in matte painting, camera projection and mapping, developing material and lighting looks right inside after effects using the same assets right from your pipeline. That is a fantastic thought, so AK/AE goes beyond creating rotating logos and brick-shaped objects for your motion graphics background, it is a serious attempt at true 3D workflow and tools right in after effects.

No. Not really. This concept of integrating 3D renderers into work environments is far from new, only new to after effects. AtomKraft has been a product for the Foundry’s high end compositor Nuke for a while now, and there are plenty of re-lighting and look development specific stand alone applications that will integrate into doing real work much the same AK/AE is meant to.

AE 3D or AtomKraft…What’s the diff?

In talking about the differences between AK/AE and the native after effects CS6 rendering the first thing that one must point out is that After Effects CS6 is optimized to do raytraced rendering in real-time. In the simplest of terms, it is trying to display an image using the GPU’s available as fast as it can, or more or less on demand. This is similar to how a video game might display content to the viewer – it is all in real time and right there in your face all the time.

There inherently are a few problems with providing real time raytraced display. One is that you need dedicated and certified hardware to be able to do such a thing. And in the case of After Effects CS6 3D engine, you need a CUDA enabled video card. The other inherent issue is that there is a number of “tricks” employed to be able to do some of the higher end raytracing features in real time. This may mean that you are tweaking values specifically for that engine rather than the what-you-see-is-what you-get mentality. If realtime didn’t employ “tricks” it would stand to argue that there would be no need to render anything in the next transformers movie as you can just play the movie out much like you would a video game, but we all know that doesn’t happen. We need to render.

That is not to say that realtime rendering doesn’t have its place because it does. There are a ton of realtime rendering packages out there, and they are great for nailing down particular looks on materials, lights, and providing near instantaneous feedback on the project that you are working on. They can also be used to provide a final rendered image, however that comes at a cost. Time.

AtomKraft is different in this regard in that although it does provide instant feedback, for the most part AtomKraft operates an integrated off-line rending engine in after effects. This means that you won’t get a fully rendered image until you render the composition that you are working on, and at that point, you are rendering the 3D in your composition much like how a 3D application would render.
Having said that, AtomKraft does provide the instant feedback you need as well while working on an After Effects composition as well. However it does this with standard OpenGL that rarely has ties to specific hardware. AtomKraft’s place is to remedy the need to go back and forth between the compositing stage and the 3D stage of a project. AtomKraft innards are based on DNA Research’s 3DeLight Rendering Engine, which is a hybrid REYES (Renders Everything You Ever Saw)/RAYS RenderMan compliant renderer – that is a big deal. Plenty of high-end production facilities are using 3DeLight for its speed, efficiency and its ability to crunch in a production environment. All of this really represents the first complete 3D toolkit for After Effects where you can import, generate or modify 3D geometry that may come in different formats.

Physically in After Effects

AtomKraft installs itself as a plugin that is completely integrated in After Effects. It installs the rendering engine which can used on a per-composition basis being found on the composition settings advanced tab and shows up in the list of available renderers drop-down menu right beside After Effects’ Classic 3D and the New Ray-Traced 3D. In fact selecting AtomKraft from this list essentially turns on AtomKraft within After Effects and it pretty much ready to go.

AtomKraft Elements in After Effects from lester banks on Vimeo.

Also included in the install you will find some items in the After Effects Effect menu where you can find the AtomKraft specific effects of AtomBasicMaterial, AtomIndirect, AtomOutputChannel, AtomSweep, AtomTagGeo, and AtomTagParticle for placing on specific layers when working with AtomKraft. These will take care of creating Shader Materials for rendering, creating render passes from layers right in after effects, creating AtomKraft geometry, and there is even an effect for rendering subdivision surfaces at render-time.

AtomKraft parallels the AtomKraft Nuke with some of the same nodes that show up in After Effects under the effects menu. These allow you to extend AK/AE to do anything from create render passes, import OBJ and Alembic files, create geometry right in After Effects, render meshes as particles (including points, spheres, disks, solids or metaballs), create special light effects for global illumination, and add materials to imported 3D surfaces and meshes.

Applied to a layer set to the AtomKraft Renderer in after effects the AtomOutputChannel effect will allow you to create a pretty diverse and impressive list of render passes right from a render. The AtomOutputChannel effect needs to be used on a nested composition that uses the AtomKraft setting as the Compositions renderer and also allows you to to limit the render passes to the scene’s listed light sources which is helpful. I found that the display would not update at times with the beta version when switching pass types in the effects panel (i needed to move the timeline for the viewport to update), however AtomKraft does show you a preview of the selected render pass about to be created right in the AE comp window.

Being that all of the render pass settings are under a drop down menu rather than an interface where you can simply check or select the multiple passes that you need, you need to apply a AtomOutputChannel effect for every pass that you want to create on a nested pre-comp layer, or alternatively use a nested composition per pass.

The AtomOutputChannel render pass choices include:

The AtomTagParticle effect is used to attach tags to geometry allowing you to render geometry as particles, points, spheres, disks, solids or even metaballs.

Although the AtomBasicMaterial has the word “basic” right in the name, it is actually a more advanced material than the default material used in After Effects. AtomBasicMaterial is based on the Ashikmin-Shirley shading model. It is a physical shader, and energy conserving and has support for glossy rays, displacement mapping, bump mapping, subsurface scattering, anisotropy and opacity. In addition, features such as displacement, bump, subsurface scatter, anisotropy and opacity are all mappable by images. The AtomBasicMaterial will also allow you to render material previews when applied as an effect to a 2D solid in After Effects offering cube, sphere or cylindrical display objects with the material in use.

Displacing 3D Models in After Effects using AtomKraft from lester banks on Vimeo.

AtomRender is the portal into the main rendering settings for AtomKraft. Here you are able to control all aspects of the AtomKraft renderer with controls for shading and antialiasing samples, filters, down-sample degradation settings, camera attributes, scene scale, ray bounces, shadow samples, and all the other great settings you might be accustom to tweaking in a 3D application. There are certain things that are not supported in After Effects with the AtomRenderer, such as layer blender modes, 3D text layers, and light transmission.

It is hard to comment on something that is incomplete, however AtomKraft represents a great shift in After Effects workflow with a viable production ready 3D solution that is waiting for users to take hold of and do some pretty great things with. I am eager to see it through to the final release and find uses for it at the studio.

When and how much?!

AtomKraft is still in the public beta phase and while the schedule is to have it complete for the end of June or early July, there is no word on the pricing yet other than it will be a lot less than you think in comparison to the Nuke counterpart.

Some of the links on lesterbanks are "affiliate links", a link with a special tracking code. This means if you click on an affiliate link and purchase the item, we will receive an affiliate commission. The price of the item is the same whether it is an affiliate link or not. Regardless, we only recommend products or services we believe will add value to our readers. By using the affiliate links, you are helping support our Website, and we genuinely appreciate your support.
Creating a 3D Animated Countdown in Maya Previous
Creating Animated Organic Tentacles in Cinema 4D without... Next

AtomKraft for After Effects Sees Release With Special Introductory Price