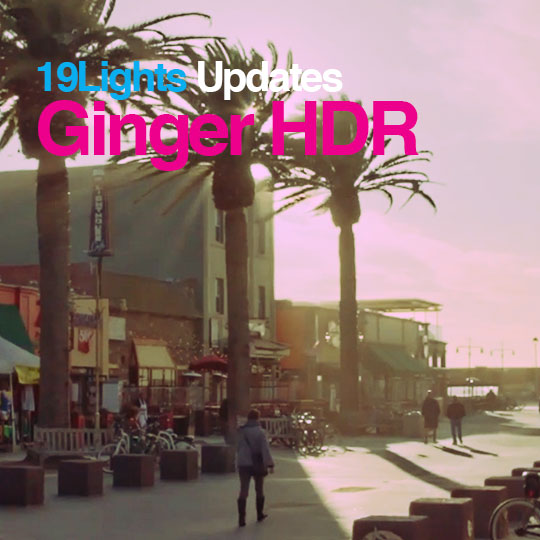 It has been a while since there has been an update to Ginger HDR, and in a recent post 19Light’s John Hable explains why. There has been a shift in the core philosophy of Ginger HDR where moving forward Ginger HDR can be thought of as an expanded toolset for the still quite new premise of HDR video.

Ginger HDR is a plugin for doing HDR Tonemapping inside Adobe After Effects (CS 3.0 and higher) and Premiere (5.0 and higher) on Macintosh and Windows. You can download the 30 day trial below and if you like it you can purchase a serial number $199 USD. However, Ginger HDR is currently on sale for $149 USD. If you want to get more familiar with the HDR workflow for Ginger HDR in After Effects, you can check a previous post here.

Originally, Ginger HDR was just an HDR Tonemapping plugin. But going forward you can think of it as a collection of tools for the emerging world of HDR video

Having said that, one of the most notable changes to the Ginger HDR tools has been the separation of Ginger into two flavors in response to user feedback there are now Ginger HDR Advanced version and Ginger HDR Basic versions. The idea is simply to make Ginger more accessible to new users who might have been intimidated by the total number of options available for tweaking. Now the Basic version comes with a tighter and more compact set of 9 parameters. Concise, and core to what you need. The basic version is using the same underlying algorithm as the Advanced version, only with the core set of attributes and parameters.

19Light’s notes that there is no separate pricing or licensing scheme for the Basic or Advanced versions -A license of Ginger HDR gives you access to both versions, simply choose which to use.

Another notable change in is a new feature under local contrast called “Fix Thin Lines”. Sometimes when using overly strong local contrast options in Ginger HDR, you can start to see artifacts in the contrast boundaries that show as parallel lines. The “Fix Thin Lines” option essentially trades “thin lines” for “halos”, so if you increase it too much you will have halos start to appear – however it is fairly simple to find a middle ground between the two.

Some other changes to Ginger HDR get listed:

We need a vacation! Previous
emFlock2 for Softimage Adds Ability To Have Particles... Next