Side Effects Software’s Production specialist Scott Keating hosts a Houdini tutorial looking at using the Flat Tank Tool that will create the simulation for an animated prop that floats through the water. This is a great overview for the Flat Tank tool walking through the nodes that are created by the shift tool with an explanation for the role that each one plays in the network.

In this tutorial, you will learn how to use the Flat Tank tool from the Ocean FX shelf to interact with an animated prop

The Flat Tank tool in Houdini creates a FLIP tank simulation of a flat tank of particles that are similar to the ones you might find in the FLIP Tank tool. The difference is the Flat Tank Tool has an additional boundary layer of particles than can help suppress reflections at the edge of the tank. This can help minting the water levee over time.

This boundary layer addition can also track a moving object. This will have the Flat Tank only simulate the immediate area around the object, saving on simulation time.

You don’t have to build out a huge distance for this particular simulation, this is one of the benefits of using  the Flat Tank. The Flat Tank Tool will also take care of all the other aspects of the animation including spray, foam and pretty much everything else.

If you are new to Houdini and would like to follow through these lessons, be sure to download the FREE Houdini Apprentice edition then go through the User Guide and First Steps Intro lessons. 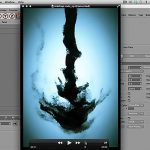 How to Create a Long Wake With Side FX Houdini

How to Create an Initial State for Houdini Water Simulations

Working with the Houdini Ocean Toolkit in Maya