Animating With a Reaction Diffusion System in Cinema 4D

Want to move beyond animating a displacement in C4D? Why not use a Diffusion Reaction System? Taking a step, wikipedia defines a reaction diffusion system as — “Mathematical models which correspond to several physical phenomena: the most common is the change in space and time of the concentration of one or more chemical substances: local chemical reactions in which the substances are transformed into each other, and diffusion which causes the substances to spread out over a surface in space.”

Pretty nerdy, right? But what does this all mean? Simply put, it is just a mechanism that drive anything from cel division, natural growth, or markings on animals. The cool thing is that you can use a Reaction Diffusion system, to drive interesting animations in Cinema 4D.

Even though Corrado isn’t sure that it qualifies as “true” reaction diffusion, it does look pretty when it’s animating! 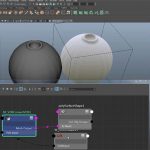 Create Your Own Displacement Map With C4D

How to Get Better Control Over Animated Noise Speed in C4D