How to Make a Sci-Fi Component Using MOI3D

Contrafibbularities shares more tips for working with MOI3D to create a Sci-Fi Component.

Wolfgang Rode adds to his MOI3D tips and workflow for Cinema 4D users with a new tutorial that shows how to create a sci-fi component.

When creating hard-surface models, each task requires a different process. With MOI3D, there is a wide range of tools that allow you to solve problems. “In this MoI3D tutorial, we will model practice the skills we have learned in the previous MoI videos and create a nice-looking simple SciFi part,” Rode says about the tutorial.

Adding MOi3D to Your C4D Workflow

Wolfgang Rode is adding to his series that shows how a vertical 3D modeler like MOI3D can help Cinema 4D Artists. The tutorials cover MOI3D techniques and how artists can use them in a Cinema 4D workflow. MOI operates differently from a polygon modeler. It works with surfaces or NURBS, allowing you to build complex shapes quickly.

Wolfgang Rode, believe it or not, is a 3D hobbyist. He usually works with Maxon Cinema 4D, using it mostly for hard-surface and SDS modeling. Rode shares a lot of his knowledge recording free video tutorials on modeling in C4D and now MOI3D. 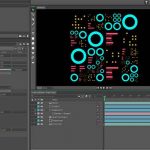