Use Cinema 4D as a Time Based Animation Cache Sculptor

Yader calls this technique in Cinema 4D, “poor man’s Chrono sculpting” – but being that the Lightwave Group’s  ChronoSculpt is under $400, I like to think of it more as “working with the tools that you have”.

If your object isn’t as complicated as the Dinosaur in my example one can conveniently “sculpt” the motion paths and change the behavior of the geometryYader (Derya Öztürk) - yader.de

Here, Yader presents a technique for using Cinema 4D’s built in tools to be able to sculpt on animation cache files. This can be a great workflow for adding corrective shapes to the deformation of a character, or altering the model by actually sculpting changes over time, directly from the animation cache.

Yader uses the Matrix Object’s Rate option and the Inheritance Effector’s Morph on Motion effect in Cinema 4D to move the object along editable paths created from the Tracer. The inheritance Object applies the animation back into a still copy of the initial geometry. Yader notes that if you use the rate variation function, you can get a motion based deformation effect happening which can look a lot like a motion blur.

Yader does a much better job of explaining it than I do, so be sure to check out his original post for his QuickTip 49: Poor Man’s Chrono Sculpting here. 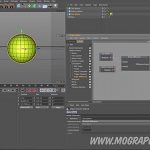 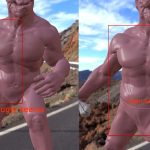 Get Started Sculpting in C4D With This Primer