Roman Armankutsev, SFX, VFX Artist and CGI Modeler from CarteblancheFX carries on with his tutorial series showing how to rig a car in from start to finish in Cinema 4D using xPresso.

Continue our series of tutorials dedicated to the rigging car in Cinema 4d using xpresso, today in chapter 3 we talk about light

Roman shows how to create the headlights of the car in part three, by adding IES profiles to the Lights in Cinema 4D for a realistic headlight look for the car rig, and makes some controllers using Xpresso to dive them, so that you are able to focus the light direction for the car rig in the scene easily, and change the light intensity in the same way.

Roman covers the rigging process from start to finish and in the first part of the tutorial looks at things like how to get the wheels of the car rotating when the car is moving, and associating the rotation of the wheels with the axis that the car is moving along.

In part one Roman ads the ability for dynamic inertia for the car so that it will look more realistic when it starts and stops moving using some springs in Cinema 4D. In part two, Roman expands on what was created in part one, by rounding out the motion properties on other axis. 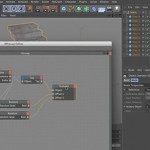