What If Typefaces & Fonts Were Designed Specifically For 3D?

Postscript and TrueType have democratized the desktop publishing industry in the early days of computer graphics. Before the DTP revolution, specialized systems required users to shell out thousands of dollars for a single font. This was one of the reasons why your favorite TV shows in the 80’s only seemed to use a handful of typefaces.

think about how a font/typeface has to be structured, so it can be used better in the 3D world

While some things haven’t really changed since the DTP revolution, plenty has. We are using typefaces that were designed for print. Be it on paper, display or sign. While we now enjoy the ability to acquire proportionally inexpensive fonts to work with, the way we work with than has changed.

If you have ever tried to use a specific typeface style or font for 3D, you may already understand what I am talking about. Isn’t it time to have fonts that were specifically constructed to work better with 3D?

Prototyping such a thing, Yader, (Derya Öztürk) has created a font that was specially designed for 3D work. This means that the font  has great topology right out of the box.

When working in any 3D application, likely you are able to create a new 3D element from any font you have on your system… Theoretically.

Although you are able to extrude the font or typeface successfully into a 3D object (most of the time), depending on what you are doing with you new 3D shape – your work is not over.

Being that the letterforms were designed specifically for print, bringing them into the 3D world poses some issues.

A very few typefaces will transform itself into the 3D application with 2D or 3D geometry that will be conducive to deformation, animation, texturing, or even on a construction level, adding details such as beveling.

You most likely have re-topologized extruded fonts and typefaces in your workflow before. I am also sure that you have encountered a font that would not take a bevel, or maybe even translate into a 3D shape at all.

What If There Were 3D Specific Fonts?

What if we came to a day where a font family had a 3D option as part of the purchase. Shouldn’t we be able to buy a specially built well structured typeface along side the weights available for the font? Shouldn’t this be a thing?

Having a typeface that transformed itself better to the 3D world would really be a valuable commodity. You can quickly work out your models not having to worry about how the typeface will bevel or even translate into 3D.

In Yader’s example,  you see him playing around with a typeface he created, roughly based on the Open Sans font. Yader created it so that it would have even divisions and segments, which can be easily extruded, beveled and subdivided.

This makes the font enormously better for taking a chiseled or rounded edge, and it is a kickstart into texturing and sculpting. 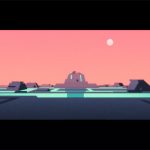 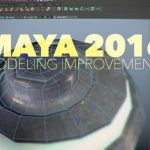