If you think about it, there are plenty of surfaces that would require the use of a double sided shader. Anything like printed paper including money, labels on clear glass or plastic, or even a leaf.

how to make a double sided shader in two ways.

In the past, creating a double sided shader in Maya required a few utility nodes to read the normal direction and then display the correct shader based on if a condition is met. It sounds complicated, but it is actually quite simple.

Since the latest release of mental ray however, there is a new way to create a double sided shader, using the new MILA layer shader. MILA represents the path forward for physically accurate shaders in mental ray.

Physically accurate, energy conserving shaders move to a new direction from the “legacy” (but still available) MIA shaders. MIA was, and still is a monolithic shader. The idea was that there could be one shader that would facilitate every material you could need in production.

This was a great idea, however, if you are not using reflections, refractions and fresnel, the shader then presents a lot of overhead, even though some attributes are not bing used.

This is where the MILA shader changes the foundation of how you create shaders in mental ray. With MILA, you can add components to the shader, that are needed, and leave out what you don’t.

This makes the shader much more efficient than the MIA shader ever was. Need proof?

Watch Autodesk’s Dayle Obert create a double sided shader, once using the legacy method (not with MIA but with Maya SW nodes), and again using MILA as a comparison of setup and render time.

The MILA double sided shader ends up rendering 300% faster, than the Maya legacy nodes. Keep in mind a portion of the speed gains would be from using mental ray shaders over Maya software Shaders. Simply choosing the correct shaders for mental ray will speed up rendering for your scene, over standard lambert, phong, and blinn shaders. 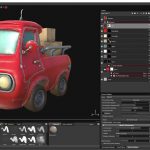 An In-Depth Look at the New Baked Lighting Filter in... Previous
Children of Future Sleep Next

Working With the MILA Layered Material in Maya 2015

Getting Familiar With MILA Material Properties and Base Phenomenon