London based Motion Design & Animation Director Simon Russell has had a long standing fasciation between the interaction of sound and shape. This forms the basis of his experiments that use Side FX Houdini. Instead of the standard “audio reactive geometry”, which we have seen many times before, this is quite the opposite.

Simon’s experiments are geometry triggered audio. Shapes and mathematically derived animation are assigned tones. With the example above, the colliding particles create an audio pulse that is based on their height. The audio is also generated from the intermittent burst of particles.

The basic elements are exported from Houdini into Cinema 4D where cloners and splines are used to create additional geometry for the final rendering. 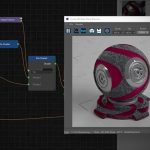 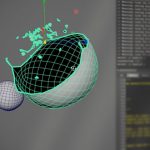