How to Create a Planet & Moon Rig With After Effects

Mike Ridolfi of Mobox Graphics fame shows how to create what looks like a simple planet & moon animation. In fact, an orbital interaction like this can end up being much more work than bargained. The moon has to go to the planet and the planet then needs to be able to travel on its own, around a sun. Not to mention that the Earth will have to spin on its own, and the moon will have to be obscured by the Earth for part of the orbit.

Ridolfi uses native After Effects effects. The trick is to use auto-orientation to make 2d elements look as if they were 3D. CC Sphere takes care of getting the celestial bodies look spherical. The rest is left up to expressions to interconnect everything and build animation controls. In the end, you will have a scene that is complete with lunar orbits, lunar rotation, Earth spin, and shading. 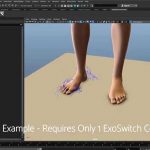