How to Do Per-Character Type Animation in Cavalry

Cavalry does a lot of things a lot more quickly than you ever could in Adobe After Effects, and that’s the whole point. Some elements might not be glaringly obvious to create, but once you get into a modern workflow mindset and out of the convoluted Ae fog mindset, you will find that Cavalry is a breath of fresh air.

An example of how Cavalry’s individual tools are more significant than the whole is how you can create per-character type animation.

In Cavalry, animating text on a per-character basis requires the use of the Sub Mesh Deformer.

You can use the same idea for SVGs and Duplicators or any shapes that are ‘sub meshes’.

Here we’re using a Stagger Behaviour to create a ripple effect, but you can create different effects with different Behaviours. e.g., replacing the Stagger with a Random The randomly offset behavior will result in each letter moving individually in time.

Hardcastle says to “Try extending this idea and adding your Text Shape to a Duplicator and then using a second Stagger on its Shape Time Offset and Shape Position. See what happens when you add a Color Array to the Text’s Fill Color.”

He also mentions that “If you want to do a similar thing with Words rather than Characters then play with the Recursion setting on the Sub Mesh.”

Check Out Armada Pipeline a Free Open Source Pipeline... Previous
How to Work With UDIMs in Blender Next 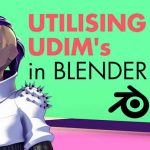