How to Set Up an ACES Workflow With Redshift C4D, Ae

Kyle Franke shows how he sets up for an ACES workflow in Redshift, C4D, and After Effects.

Workflows are forever changing. There are very few that are ever evergreen. When it comes to colorspace workflow, ACES changed quite a lot of things. A new tutorial from Kyle Franke demonstrates how he sets up an ACES workflow between Redshift in Cinema 4D and After Effects.

ACES is the Academy Color Encoding System created by folks in the industry to have a consistent and accurate color interchange and workflow. The ACES project began its development in 2004 in collaboration with 50 industry professionals. While most DCC’s will have a way to work with ACES, each has its implementation. “This tutorial will show you my workflow for ACES CG,” Franke says. The tutorial covers how to set ACES color up in Cinema 4D and Redshift, then composite on After Effects. 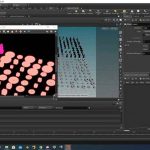 How to Quickly Create a Realistic Moon With C4D and Octane