How to Recolor Echo and Repeaters With Colorama in Ae

Nick Greenawalt demystifies Colorama and shows how to color Echo and Repeaters.

To no fault of the user, it’s often difficult to understand how Colorama in After Effects works. While most apps standardized on color remap ideology, Ae chooses to stick with Colorama for some reason. That said, Ae’s built-in color remap effect does work, and in some ways that you might not expect. Have a look at this new tutorial from Nick Greenawalt (Motion By Nick), who shows how you can effectively remap the Echo and Repeater effects in After Effects.

All About the Alpha.

Greenawalt shows how to work with alpha values to distribute the color gradient amongst elements generated by the echo effect. Similarly, you can use the same technique for repeaters too.

Nick Greenawalt is a Philadelphia-based motion designer. By day he works at an experience strategy and design agency called Bluecadet. By night I create tutorials, process videos, and fresh content on youtube & Instagram. 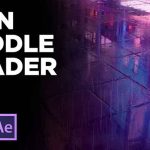 How to Combine Physics Now! With 3D in After Effects

Create an Easy Ae Glitch With One Animation and One Effect

How to Graph and Animate Polar Equations in Ae