If you have even done any character animation work in After Effects, then you are familiar with the puppet pin tools, and the one tool that brings it all together, Duik. Based on the initial IK expressions laid out by Dan Ebberts, Nicolas Dufresne’s Duik – DuDuF IK & Animation Tools brings the ability to rig characters for animation to After Effects in an effective and usable way.

The long awaited 14th version of Duik is now available, bringing its Autorig, Stretchy IK, Rotation Morph and a lot of other new features and upgrades

Well, people rejoice as the Duik rigging tools for After Effects have been updated and released. Duik 14 offers some amazing new features that bring it almost parallel with other rigging tools found in 3D applications.

It was about a year ago, that we had a look at Nicolas Dufresne’s intentions and goals for a new Duik. Nicolas teased a host of new features, but also mentioned that his wish was for Duik to remain free. With Duik 14, Nicolas has delivered on those promises.

The newly released Duik 14 offers a new autorig tool, a new automated spring, the ability to create stretchy IK setups, as well as a much needed IK / FK switch which is integral towards character animation workflow. There is even a rotation morph which is a blendShape-like effect of the base shape deformation on rotation of limbs. This makes it possible to have some basic secondary animation happen when joints are rotated. 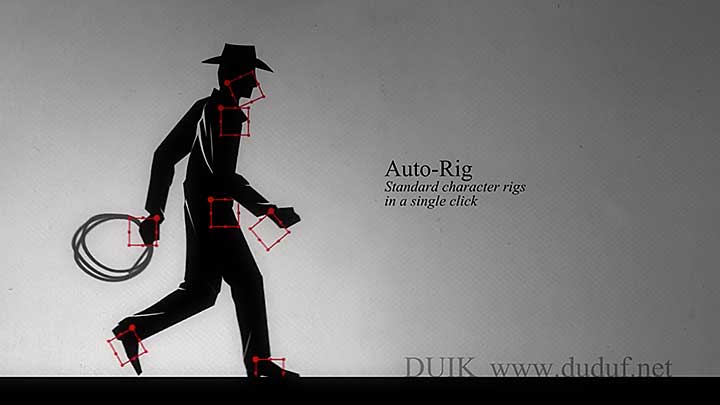 Duik builds upon the previous versions, and forges ahead in nw and useful features aimed at making Duik 14 an indispensable animation tool for After Effects. 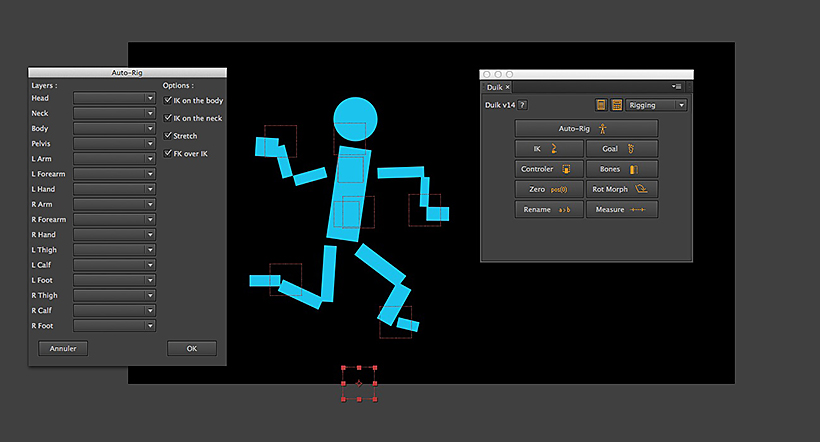 Duik’s Autorig can automatically rig a bipedal character win a click or two. All you really need to do is move around the anchor points to correspond to the joint locations, and Autorig will take care of the rest – creating all the controllers, parenting, IK and expressions. Autorig is also very flexible, adapting to your character. If your character has a unique number of limbs, the rig is automatically adapted accordingly.

Duik for After Effects now has an automated spring simulation. When the spring is applied to the position of a layer, a spring simulation is calculated based off of the velocity of that layer. There is no need to keyframes, however there are controls so that you are able to tweak how the effect works. Spring is great for secondary motion in animation.

Any Character setup needs to have the ability to create “stretchy” limbs. Now with Duik 14, this is an option when adding the IK system. Limbs can stretch out beyond their default point, and can also be stretched by animating a value in the effects panel as well.

For animators, it is extremely relevant to animate with the option of using IK or FK. The ability to move back and forth between the two is crucial for animation workflow. Duik 14 for After Effects now includes the ability to have FK controllers within the IK system. You can deactivate IK and allow for FK animation, and switch back and forth freely. This is a huge new addition to Duik’s toolset.

You can create a muscle flexing effect using the new Rotation Morph in Duik 14. Rotation Morph was built to easily control how a property changes when a reference layer rotates, making it a valuable tool for character work.

Duik 14 for After Effects offers a new tool for re-using or repeating animation. You can copy the animation of many layers at one time, and past it in another part of the Ae Composition, or even from one comp to another.

Duik is still free, and can be found at DuDuF. Check out the DuDuF R&D page for more information and download of Duik 14 for After Effects here.

Duik was created because it was needed in some animation productions, and now it’s done, let’s share it!
Duik is completely free, and will stay free, for any purpose. You can download it, use it, share it, modify it, as much as you want!
Being free, Duik became a must-have to animate on After Effects, used worldwide, downloaded more than 100 000 times since its first release in 2009. And this won’t change! Even being a great success, Duik won’t be sold. Let’s share techniques and knowledge!

So, Duik is free software licensed under GNU-GPL v3.

If you want to help development, so it can continue to evolve, and hep maitain this website up, you can donate the amount of your choice. 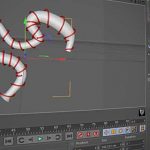 Parametrically Wrap Splines Around Objects in C4D Previous
Getting Familiar With MILA Material Properties and Base... Next 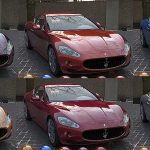 RubberHose, Bendy Preset Limb For After Effects Surfaces for PreOrders

Create Simple Head Turns For your Characters in Ae