Insydium has offered an open beta for X-Particles 3. The latest release of the tool showed off a new FLIP (fluid impact) Solver, adding to the enormous list of great features in the plugin.

X-Particles 3 features a new Elektrix object for lightning or electrical effects, a new Branching modifier for branched structures, and a host of other modifiers allowing you to achieve other effects easily. For the complete rundown of what is in store for the March 16, 2015 release for X-Particles 3, visit the X-Particles Open Beta page. 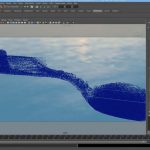