Transfer Animated Visemes from CH to After Effects

Adobe’s Character Animator is a fairly vertical tool. Its main focus is to offer an easy avenue for character animation, even if you have no character animation skills. Before you burn your animation degree and knock the years you spent studying animation out of your skull, hold for a second. Consider that there are some things about CH (Character Animator) that you can use in your workflow. CH has a way to automatically figure out the visemes for lip sync animation.

In true Adobe fashion, new technologies like this automatically become a workflow island — Meaning you can only export the animated visemes from CH with an alpha to other applications, such as After Effects, but not the keyframes. That is too bad, because keyframes would be helpful for real-world work. It’s also important to note that while other applications have lip sync tools native, AE and CH seem like pugnacious siblings in comparison.

A new tool release, as a solution that will allow you to get those keyframes for visemes into After Effects so you can integrate them easier into your compositions. By all admission Visemes CH2AE is a brute force hack, as described by its creator Lars Jandel. Lars set up a preset as a workaround, that lets you bring in visemes from Character Animator.

Visemes and Phonemes have become generalized blanket terms for aspects of lip-sync in the computer animation world. Technically a Viseme is described as speech sounds that would appear the same when they are being made. T, D, N sounds all look the same when someone is  making those sounds. A Phoneme by contrast is the sounds that are distinctive.

All of this is thoroughly explained in Jason Osipa’s facial animation and lip sync bible for animation, “Stop Staring: Facial Modeling and Animation does Right”. The book focuses mainly on 3D, but the theory is a great wealth of knowledge and applicable everywhere.

Lars explains: “Instead of just animating mouth shapes, I expanded the graphic, so it will show marks at a specified position. In After Effects, these positions get sampled and will trigger mouth shapes or other stuff. It is recommended to bake the expression though to improve performance, reuse the set up in the current scene for changed or additional audio and make the animations independent from CH at the end.”

If you are looking for a quick way to incorporate semi-automated lip sync to animation in After Effects, you should definitely check out CH2AE. 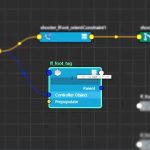 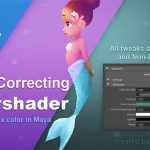 The Easiest Way to Create Lip-Sync in Ae

Create an Advanced Mouth Rig in After Effects

Link Slider Control To a Lip Sync Comp in After Effects

Lip Sync Animation in After Effects