Use Video to Drive Fluid Simulations in Houdini

Particles are always fun to work with. They can create some pretty spectacular inmates and animations. Simply animating a particle emitter can lead to experimentations and happy accidents when working with particles. What if you could have particles use a piece of digital video as an emitter? What if video were able to drive particles and fluid simulations?

Particle velocities were derived from the underlying motion graphics animation

If that sounds pretty cool, it looks even cooler. Houdini Artist Mark Fancher shows us how we can use video to drive FLIP Fluid simulations using both Houdini and Nuke. The demonstration is based off one of Fancher’s experiments where a procedural system was driven by motion analysis of video.

There lies the key. Nuke is used to generate optical flow motion vector passes. This data can then be used in Houdini as input for particle velocities. The results are nothing short of visually spectacular.

Fancher’s tutorial assumes a bit of working knowledge of Houdini 16. Topics covered include a discussion of common attributes, some vex, and some FLIP simulations. Great! 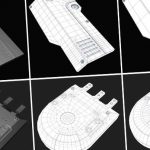 Concept Versus Production Topology: A Visual Guide Previous
Watch Every New Modeling Addition in Maya 2018 Next 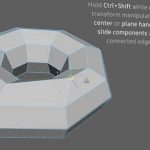