Need to have a clip look more natural? Try adding camera shake. With After Effects, the wiggle expression is pretty quick and easy. Wiggle doesn’t always look like a true camera shake, as if the motion came from a real handheld camera.

If you are after a shake that is a little more realistic, organic and more believable, the easiest way is to simply take that motion from a clip and apply it to another.

In fact, you could eventually have a library of handheld shake motion that you can refer to when it’s needed. Alternatively, you could just download a bunch of free presets, thanks to PremiumBeat.

PremiumBeat posts 15 authentic camera shake presets that you can use in your own work. The motion presets have been extracted (via tracking) from actual handled footage. They include some great moves like light and heavy movements based on a variety of lens focal lengths, and also include zooms, which can be more difficult to recreate on your own.

You can also learn how to use the shake presets in a project, following along with this tutorial that shows you everything that you need to know. 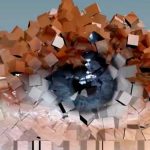 How To Stick Textures on to Simulated Objects in Houdini Previous
How To Make a Broken Glass Pattern With Voronoi Fracture... Next

DuStroke is a Free Tapered Stroke Preset for After Effects

Preset Offers a Better Power Pin in After Effects