How to Create Glitch Animation in Cinema 4D

A glitch animation effect is a great way to get dynamic action into an animation. We are all-too-familiar with these types of effects within After Effects, but rarer is Sean Dove’s look within C4D. “I was inspired to have a go at this technique after seeing the amazing work from Eduard Mykhailov where he used after effects to create some truly impressive clips and I wanted to share my thinking of how we could use Cinema 4d to create some similar results,” Sean says.

The setup ends up being one that gives a lot of control over the animation, while still allowing you to iterate quickly. Also, the glitch effect animation is driven by only two keyframes.

The premise is an augmented reality style look to the animation and as such requires a bit of tracking. “We will touch on a few key points that should give you a good idea of how to attack something like this for yourself,” Dove says. “I wanted to start this off by going over of bit of the setup of the actual graphics – then we will look at building the glitch animation before throwing in some fun camera movements to finish it off.” 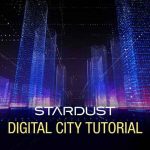 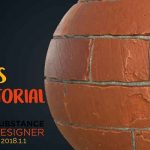 How to Model and Render Leather and Stitching in C4D

How to Create a Low-Poly World in C4D

The Benefits of Remeshing for Soft-Body Dynamics in C4D