3D Artist Simon Fiedler new 30-minute tutorial covers how to use the deformation data supplied by the ripple solver in Side FX Houdini, as a source that will emit particles. It’s a great way to get particle ripple effects using a wave-like emitter.

The Ripple Solver in Houdini is a dynamic node that lets you create waves with two type of forces, as a deformer. It is this output that will be used to drive particles, imparting a stream of particles. Fiedler offers some helpful tips for working with particles in Houdini, including suggestions for increasing resolution. 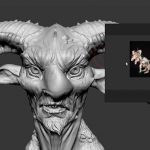